Getting Our Blue Belts 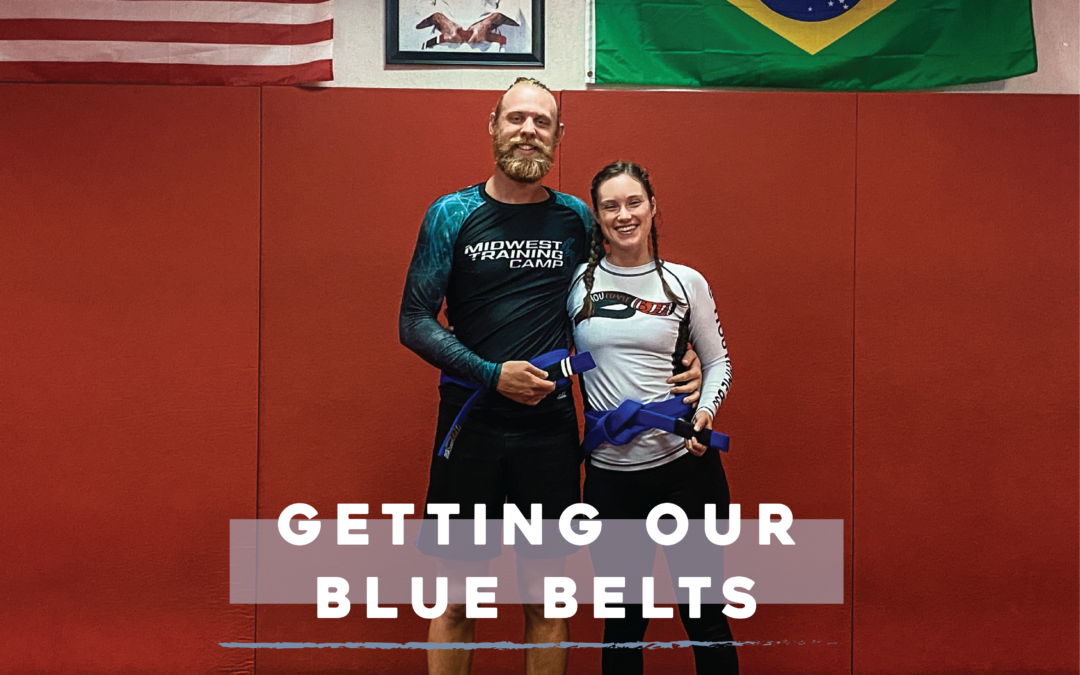 Getting Our Blue Belts

Belt promotions in jiu jitsu are just weird. For most of us, it’s something we’ve wanted for a long time and never actually feel we’re ready for. Last December, Tyler received his blue belt from Coach Sonny Parlin at Gracie Bradenton where he had started his training a year earlier. This December, I followed suit, receiving my blue belt from Coach Sonny a year after I started my jiu jitsu journey. For both of us, receiving our blue belts came with a ton of conflicting and confusing emotions. So, we wanted to share our experiences here in a blog post: 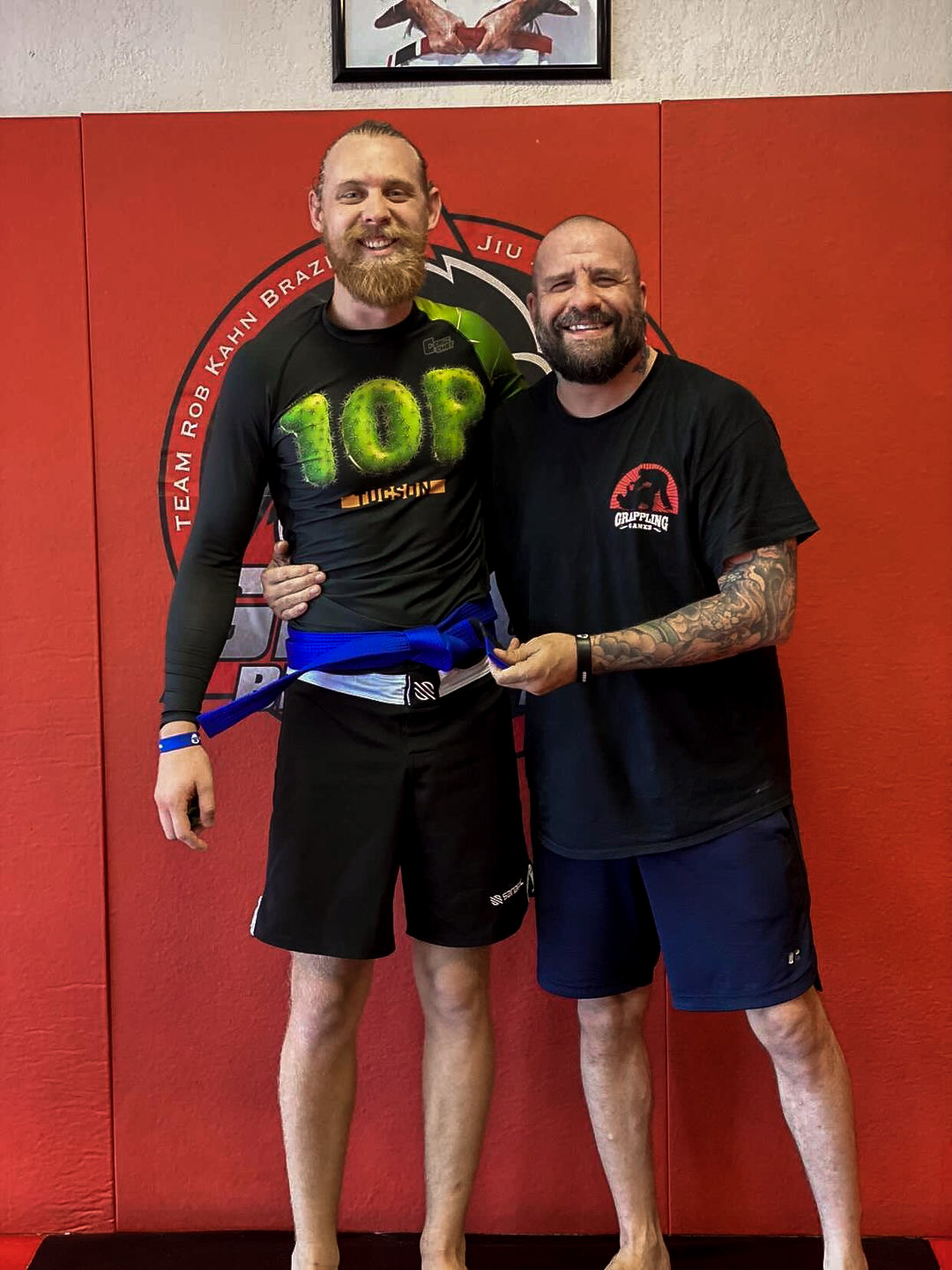 I have mixed thoughts about belt promotions in jiu jitsu, particularly when it comes to my personal promotions. Living on the road, I haven’t had a very ‘normal’ jiu jitsu experience compared to most folks – we train when and where we can, we absorb what we can even though we show up randomly in the middle of most schools’ particular curriculum at that time, and we’ve also seen vastly different approaches to promotions from the various black belts we’ve trained under. I wonder what improvement in jiu jitsu looks like for other people, but for me, it was just slowly progressing as I pushed myself to roll more and roll harder. Eventually improvement happened, but it never felt linear! And there were conflicting benchmarks to compare my skills to. Even now that I’ve had my blue belt for awhile, there are still schools we go to where their white belts can kick my butt and other schools where I’m starting to be a challenge for their purple belts. So how can I really understand the objective measure of receiving my promotions?

Well, I guess early on I just had to decide that it came down to me and my own improvement. Yes, the belt system is some sort of objective marker to measure growth by, but I like to focus more on what I’m noticing in myself. Besides, as my good friend told me when I received my blue belt, “It’s not your decision – a black belt gave you that blue belt and you have to accept it.” So blue belt for me really meant that I was no longer allowed to have the same excuses I used to. Am I rolling today? Yep, I guess so because I am a blue belt after all. Can I just tape up that injury and get some rolls in? Yep, I can do that. Do I want to work wrestling, work leg locks, go an extra minute, do a competition roll in front of everyone, accept a roll from the tough guy, etc, etc? Yes, I have no excuses to say no to the tough things anymore. And honesty, that mentality kind of works for me! It’s about what I can bring today, whether I’m willing to step up and do something extra that it would be OK for a white belt to say no to.

And the biggest difference that followed from that mentality was that I just got tougher than I was. Without allowing myself the excuses, I can take on more, so I learn more too. Starting with the blue belt, I made myself get tougher. And to be honest, that’s the only reason I started doing jiu jitsu in the first place, so I guess it’s working out. I just received 2 stripes on my blue belt while we were down in Florida at the gym where I started the journey, and it felt good. Gotta keep pushing! 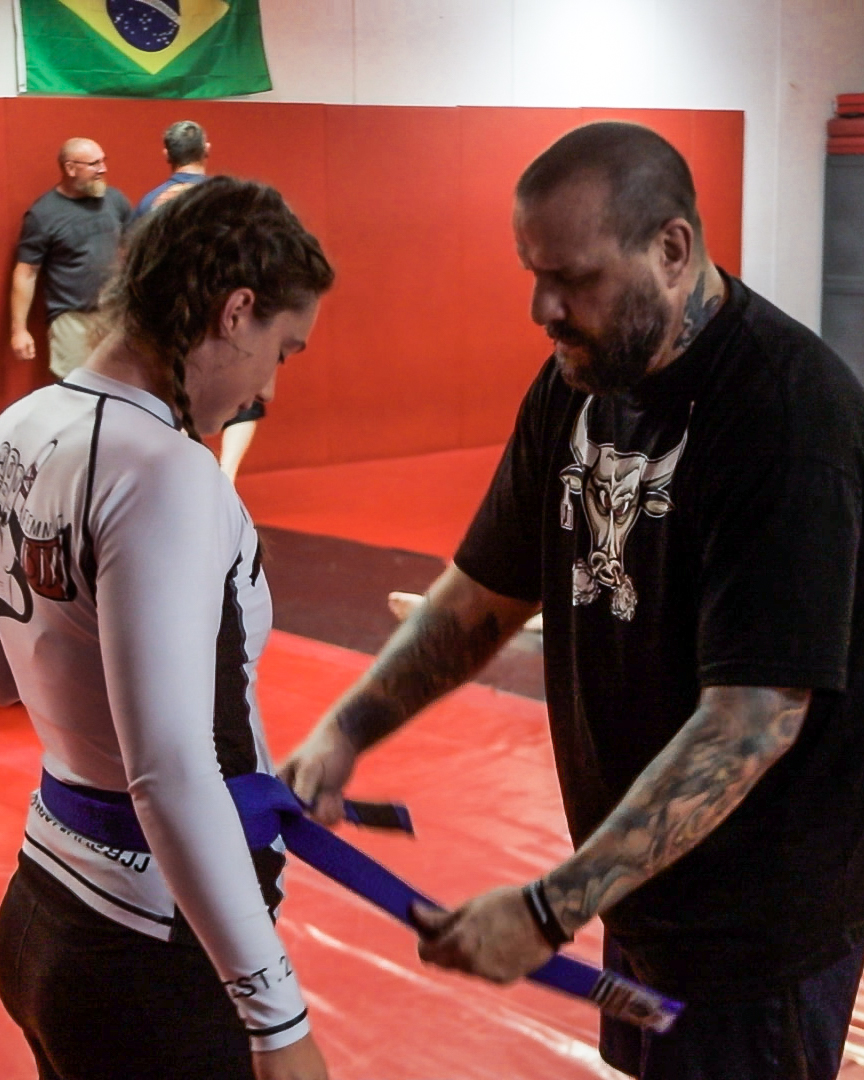 When we were driving back to Bradenton, Florida, I spent a lot of the car ride mentally grappling with whether I was hoping for a blue belt or not. Along with all of the usual considerations (am I good enough, what are other people going to think once I receive it, have I even improved at all), I was concerned about the storyline of my documentary, American Jiujiteira. After Tyler convinced me that I could make a good story either way, I decided that I probably still sucked too much to even be considered.

However, when I showed up to class at Gracie Bradenton, Coach Sonny immediately said with a smile, “It’s been about a year, hasn’t it? We’ll have to see how you’re doing,” and I knew that I was not going to slip by unnoticed. The evaluation was on.

Following the class, Coach Sonny instructed me and my partner, Jessie (a purple belt, no less) to come roll front and center where he could watch and evaluate me. As expected, I was completely dominated and I tapped 3 times in the 5 minute roll. But worse than that, I didn’t feel like I had rolled to the best of my ability. I got caught in submissions that I could usually see coming and avoid. The nerves of being evaluated really got to me. Then, Coach Sonny had me roll with him, saying it was going to be my “easy roll.” And in a way it was – he didn’t give me hardly any resistance. But the problem was that I had gotten so used to rolling with resisting opponents and reacting to them, I realized I didn’t have a game plan when my opponent wasn’t resisting. And before I knew it, my second roll was over, and I had not demonstrated even a fraction of what I had learned over the last year.

As I’m sitting there after my two suboptimal rolls, panting and feeling bad about myself, Coach Sonny goes out and comes back with a blue belt. It was probably a combination of the exhaustion and the disappointment in my performance, but I felt mildly like crying. There was no way I had earned that blue belt based on those rolls, but here it was. I took the next few minutes to pull myself together, and over the course of the night, I started to loosen up and have more fun rolling with my other rolling partners. That night as I did my interview for the American Jiujiteira documentary, I started to come to terms with my new belt.

There was a part of me that felt like I had to earn that belt while I was here, to prove that I can roll better than I did that first day. But a much larger and wiser part of me knew that I would. I didn’t need to stress about doing every roll perfectly, I didn’t need to overtrain, and I didn’t need to obsess over technique. I just needed to keep showing up, stay on my own track, and I would do that just fine.

The truth is that nothing changed about my jiu jitsu journey when I got my blue belt. I never wanted to be the best, I never even wanted to be a competitor. I started training jiu jitsu because I wanted to become more capable, stronger, and more confident, and that’s why I’ll keep training. 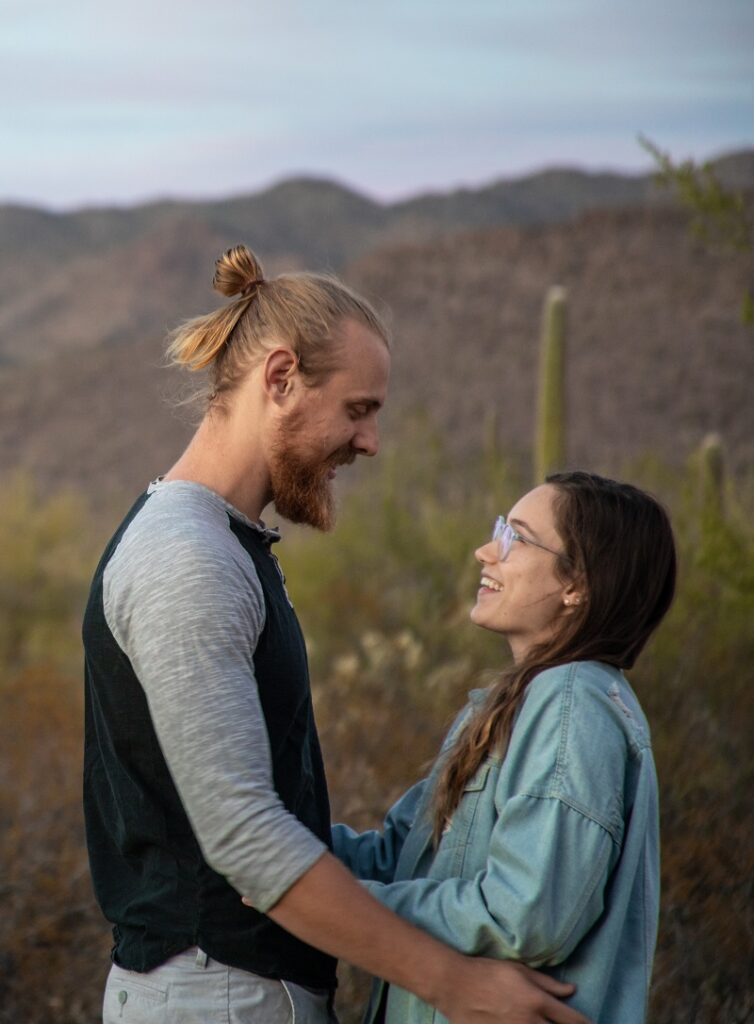 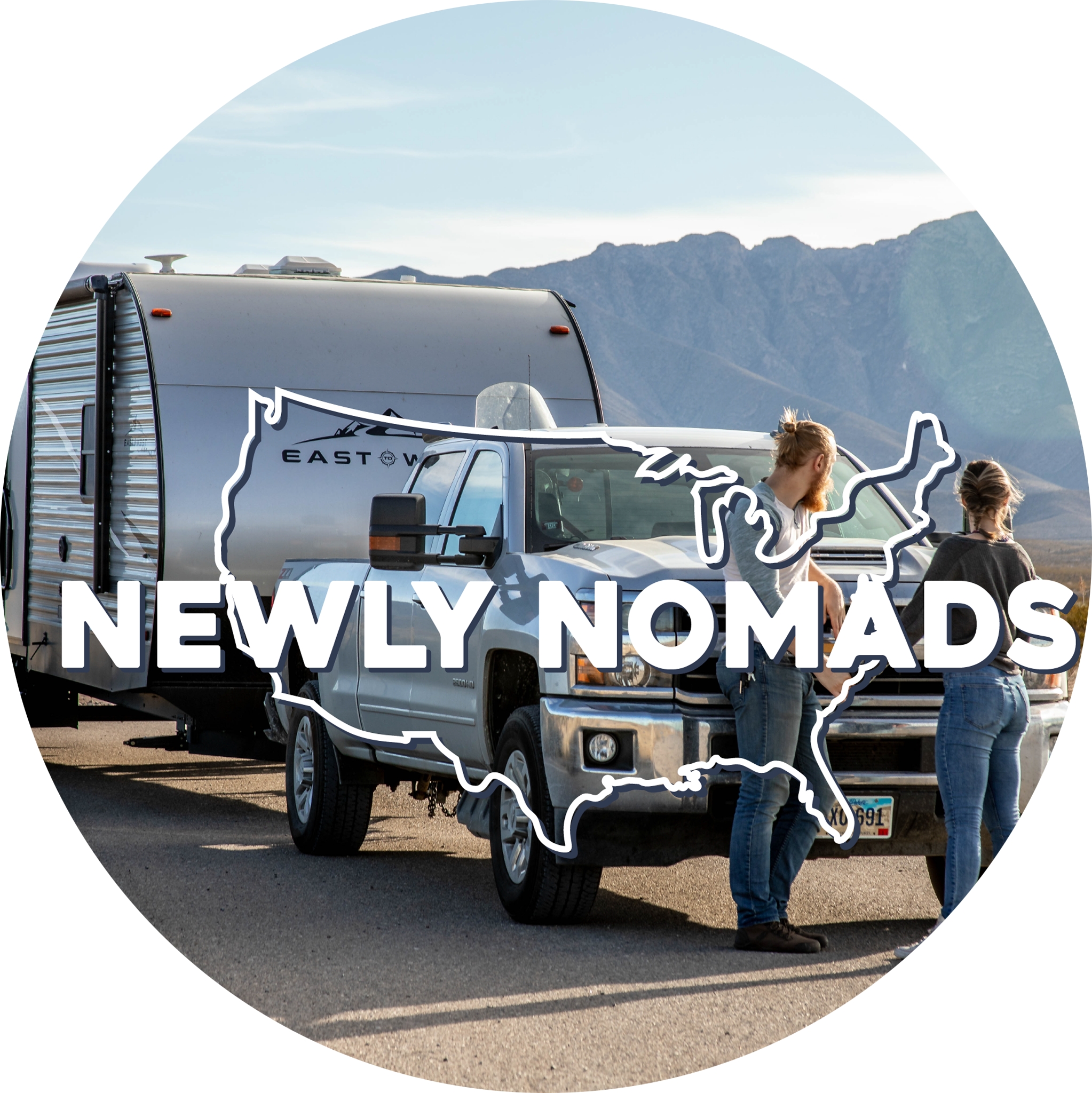 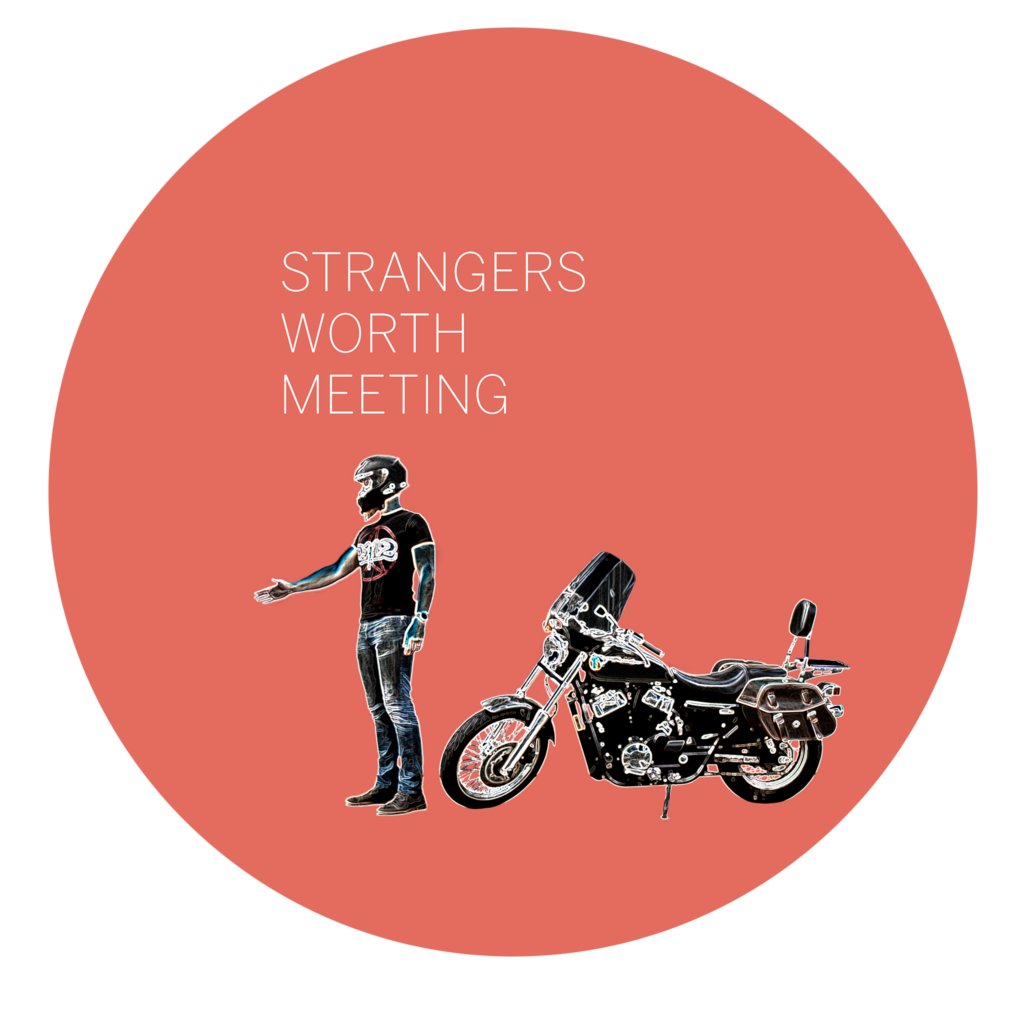